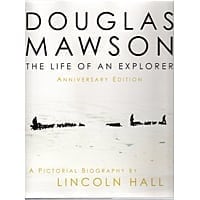 Douglas Mawson The Life of an Explorer

Douglas Mawson is the best known of Australia’s Antarctic explorers. After an apprenticeship on an expedition with Ernest Shackleton, which saw Mawson lead a small team to the South Magnetic Pole for the first time, his own expedition of 1911-14 captured the imagination of Australians, at a time when knowledge of Antarctica was scant and the frozen continent still largely unexplored. Douglas Mawson: The Life of an Explorer puts Antarctic exploration into the context of the times, and makes fantastic reading and viewing for anyone interested in Antarctica and in the life of the great scientist and explorer. Lincoln Hall offers a fresh interpretation not only of Mawson’s exploits but also of his motivations, his character and his knack for survival. But this is much more than a book about Antarctic exploration. Hall draws on his own experiences in his attempt to understand what made it possible for Mawson to achieve what he did in climatic conditions which to the uninitiated seems suicidal.HB 224 pages