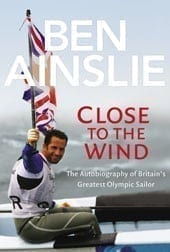 Ben Ainslie - Close to the Wind

The world’s greatest racing sailor – three-times Olympic champion (most recently in Beijing in 2008) Ben Ainslie – tells his story
Ben Ainslie’s career in sailing began at the age of eight with his family in Cornwall. What started as a hobby quickly turned into a way of life, and by the age of sixteen he was already Laser Radial World Champion. At just nineteen years old he won his first Olympic medal – silver in the 1996 Atlanta Games. Four years later, he achieved every athlete’s dream of Olympic gold at the Sydney Olympics.
After the Sydney Olympics, Ainslie changed focus and spent fourteen months with the ‘One World Challenge’ America’s Cup campaign. In 2004 he competed in the Athens Olympics and again won gold in the larger Finn Class. He returned to the Cup after Athens and competed with the Emirates Team New Zealand as an afterguard member and ‘B-boat’ helmsman.
In addition to his three Olympic golds and nine silver, Ben Ainslie has won eight World and European Championships in his sailing career to date, been crowned ISAF World Sailor of the Year in 1998 and 2002, and four times won British Yachtsman of the Year. His most recent win was gold at the Beijing Olympics in 2008.
H/B 246 Pages